The glowing ruby shall adorn,
Those who in July are born;
Then they’ll be exempt and free
From love’s doubts and anxiety.

The royal ruby is a magnificent pink to blood-red colored gemstone composed of the mineral corundum (aluminum oxide). The red color is caused mainly by the presence of chromium. Ruby gets its name from ruber, which is Latin for red. Rubies have a hardness of 9.0 on the Mohs scale of mineral hardness. Among the natural gems only moissanite and diamond are harder. All natural rubies have imperfections in them, including color impurities and inclusions of rutile needles known as silk. Gemologists use these needle inclusions found in natural rubies to distinguish them from synthetics, simulants, or substitutes. Some rubies show a three-point or six-point star. These rubies are cut into cabochons to display the effect. Furthermore, rubies can show color changes (though this occurs very rarely) as well as chatoyancy or the cat’s eye effect.

The color of a Ruby is the most important feature of the gemstone. Rubies are available in a range of red hues from purplish and bluish red to orange-red. The brightest and most valuable color of Ruby is often that of the Burmese Ruby – a rich, passionate, hot, full red color with a slight blue hue. This color is often referred to as “pigeon blood” red, a Ruby color only associated with the Mogok Valley mines in Myanmar. The color Pigeon Blood Ruby red is not the color of a pigeon’s blood but rather the color of a white pigeon’s eye.
Clarity follows color in the grading of a ruby. Like diamonds, a clear stone will command a premium, but a ruby without any needle-like rutile inclusions may indicate that the stone has been treated. Most, if not all, rubies at the lower end of the market are treated with heat to improve color, remove purple tinge and blue patches. Lead glass filling, where fractures inside the ruby are filled with lead glass (or a similar material), dramatically improving the transparency of the stone, has also gained popularity in recent years.

The Mogok Valley in Upper Myanmar (Burma) was, for centuries, the world’s main source for rubies. The region has produced some of the finest rubies ever mined, but in recent years Mong Hsu has been producing Rubies and has become the world’s main ruby mining area. The most recently found ruby deposit in Myanmar is in Namya (Namyazeik) located in the northern state of Kachin. Rubies have historically been mined in Thailand, the Pailin and Samlout District of Cambodia, Burma, India, Afghanistan, Australia, Namibia, Colombia, Japan, Scotland, Brazil and in Pakistan. In Sri Lanka, lighter shades of rubies (often “pink sapphires”) are more commonly found. After the Second World War ruby deposits were found in Tanzania, Madagascar, Vietnam, Nepal, Tajikistan, and Pakistan. A few rubies have been found in the U.S. states of Montana, North Carolina, South Carolina and Wyoming. The moon and the emotional sign of Cancer rule those born in July. They are strongly affected by the Moon’s fluctuations and family always plays an important role in their lives. They are the caretakers of the Zodiac and are distinctively gifted with real estate and food. Lunar children have a solid sense of organization and are perfectionists. With Ruby as their birthstones, these emotional, yet exceptionally gifted individuals can soar heights hitherto thought unreachable.

Ruby is an earth stone, a perfect complement to the vagaries of the waxing and the waning moon that controls those born in July. It energizes and activates the mental and emotional body, enhances self-confidence and passion for life. It is a protective heart stone that eliminates feelings of hopelessness and defeat. Ruby provides the wearer with the energies of optimism and determination. It is a stone for courage, helping ease anxiety as it brings adventure and opportunities into life.

In Western lore, Royals such as Queen Elizabeth of England and Queen Mary of Scots wore rubies as a tool for protection. It was believed that rubies would darken (dim) if they were in danger. During Elizabeth’s claim to the throne and reign over England she had many assassination threats from groups; Queen Elizabeth’s own cousin Mary wanted her dead. This is a primary reason rubies are found on the crowns of Royals. Ancient warriors wore rubies to make them invincible in battle. Rubies were the most desired gems of European royalty and the upper classes, medieval Europeans wore rubies to obtain good protection, wealth, wisdom, and success.

In the occidental world, Ruby, or Manik, represents the Sun, again a counter for the moon. Apart from being the most significant luminary of the celestial world, the Sun represents the father or the king and signifies authority. The Ruby symbolizes love, passion, courage, and emotion. It is said to give name, fame, virtue, vigor, warmth and commanding power to its user. It also enhances the status of a person. It also helps to cure peptic ulcer, fever, rheumatism, and gout.

Find your fire and soul at Gehna, with our exquisite Ruby jewelry, with and without other precious stones. Wear a Ruby set in prongs or a bezel close to your heart in a customized pendant, or as a ring on your ring finger to harness the stability of the Earth and the power of the Sun. Astrological impetus apart, on its own, the Ruby is quiet irresistible. So maybe we can interest you anyway in ruby jhumkis, necklaces, bangles, or anything else your heart may fancy. After all, the ruby does represent your heart…

If you enjoyed this article, you may also be interested in reading about The Pearl and Moonstone! 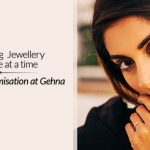 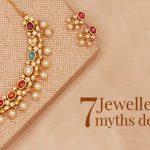